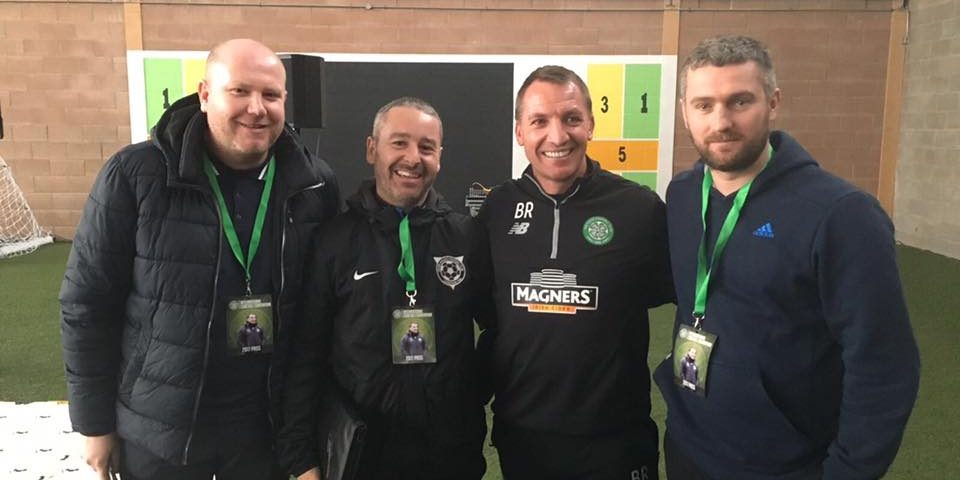 Representatives James Donnelly, Steven McKnight, Shaun Gallagher and Mark McGee rubbed shoulders with coaches and staff from as far afield as America, Canada and Kuwait over two action packed days.
Our guys were among only a handful of Scottish based attendees at the Parkhead club’s sixth annual International Coaches Convention staged between Celtic Park, their Lennoxtown Training Facility and St Ninian’s High School in Kirkintilloch, home of the Hoops’ unique School Programme.

Among the many highlights for the Thorn representatives was hearing from Celtic’s first team manager Brendan Rodgers at length on his football philosophy and getting an amazing insight into mindset from Performance Consultant Jim McGuinness.
And there was a very proud moment for the club as one of the practical sessions at Lennoxtown included former Thorn Athletic 2006 player Ben McCrystal who made the progression to the Hoops and looks to be doing very well.
Convention guests were given unrivalled access to live practical training sessions and enjoyed in-depth analytical information on match preparation and recovery for teams in the club’s academy.
They heard from staff at every level of the Academy including Chris McCart, Martin Millar, Tommy McIntyre, Michael O’Halloran and John McLaughlan who provided detailed presentations that kept all guests listening intently
and taking notes.

It was a superb opportunity for the Thorn Athletic delegates who all admitted they had learned so much over the course of the event.
Even although a lot of the content was relevant to elite level coaching, there were many ideas and pointers that can be integrated at any level of football.
Not only that, but segments of the course will undoubtedly help them all as individuals on their coaching or football journey.
Club secretary Mark McGee said: “We were all very lucky and privileged to get this opportunity to see an academy like this in full swing.

“There was so much to take in and we must credit Celtic for allowing unlimited access to their programme and letting everyone see. It was an eye opener for us all, regardless of which level of football you operate at.
“It has undoubtedly given us all a greater understanding of what we should be doing and the best ways to achieve it.”
Category: Latest NewsBy Mark McGeeMarch 21, 2017