Boss gets busy and other news! 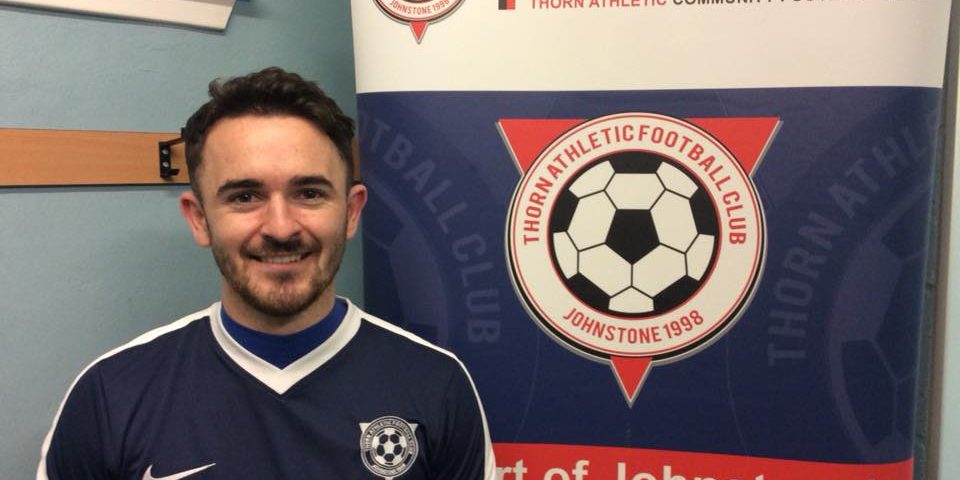 THORN ATHLETIC officials and coaches are ready for an action-packed run before the festive break.

In the past few weeks adult team manager James Donnelly has bolstered his squad with no fewer than three new signings.
Former Ayr United, Goldenhill and Yoker Athletic Juniors midfielder Shaun Kelly has joined the club and made his debut from the bench in last Saturday’s 3-1 win over reigning Caledonian Premier League champions Dalziel HSFP.
Kelly looks to be exactly the type of player who could really strengthen the squad at the right time.
Also making welcome returns to the fray were powerful forward Tom Smith and speedster Liam Allen.
Both have already made their presence felt with Allen netting in victories over Westerlands and St Davids whilst Smith provided the killer touch with the third goal in the Dalziel win.
The duo are well-known to everyone at the club whilst the fresh impetus from Kelly’s arrival is sure to help the side mount a title challenge.
Boss Donnelly said: “We have been running with a very small squad for the first few months of the season and biding our time until the right players came along or the timing was right for guys to return.
“The squad has a completely different dimension to it now and hopefully we can kick on.”

The outcome a the weekend’s RJM Scottish Amateur Cup third round replay between MS United and Clydebank AFC has thrown up a trip to Aberdeen for the Johnstone side in the fourth round.
MS United from the Granite City triumphed 2-0 on home turf meaning Thorn will make the three-hour trek north on Saturday, December 2 to bid to secure a place in the fifth round of the national competition against the Aberdeenshire AFA side.
Meanwhile, a couple of players from the club have been supporting the Caledonian League Select side in their build-up to the SAFA’s Inter-League Trophy competition.
Skipper Ryan Crawford and defender Joe Rae have both played most of the warm-up clashes against Lanark, East Kilbride, Cumbernauld Colts and Ashfield over the past five weeks.
Off the field the team is preparing for their fundraising race night this weekend at the the home of their sponsors the Thorn Inn.

And in other good news two members of the adult team – talisman midfielder Paul Young and striker Craig McMahon – will participate in the SFA’s Early Touches course at the Huntershill, the new home of Rossvale Juniors, on Friday night.
Meanwhile, many of the clubs small-sided sides are in end of season presentation mode with events past and planned for the next few weeks.
We wish them all well with their respective celebrations of their sterling work over the past few months.
Friday also sees the return of the club’s Goalkeeper Academy which has been rehomed at Seedhill for the winter months.
Category: Latest NewsBy Mark McGeeNovember 15, 2017