FORMER Scotland manager Craig Brown will speak at our first ever Player of the Year Dinner at the Paisley 2021 Stadium on May 27.

Brown, now 75, was the the last international boss to lead the country to a major finals when Scotland qualified for the World Cup in France 1998, following their run to Euro 96 in England.
But now he will become the first headline speaker at the club’s end of season gala dinner at the home of St Mirren, where guests will enjoy a superb three-course meal, waitress service, top-notch entertainment, a presentation and auction.
Brown, who is also a Bachelor of Arts in English and geography, is expected to recount stories of his time in top-level football management and some of the characters he’s come across over the years.
Also keeping guests entertained on the night will be John McKelvie who is a highly-rated regular on the Scottish after dinner circuit.
Former referee McKelvie – a top cop with Starthclyde Police for around 30 years – spent man seasons officiating in the amateurs and refereed the showpiece Scottish Amateur Cup Final.

Meanwhile, former Aberdeen, Motherwell, Preston North End and  Clyde gaffer Brown joined the SFA’s staff in August 1986.
He spent seven years as Assistant Technical Director and Assistant National Coach leading the Under-21s, Under-19s and Under-17s through successful periods.
After one game in temporary charge of the senior squad against Italy in Rome he was appointed International Team Manager on November 17, 1993 in succession to Andy Roxburgh. 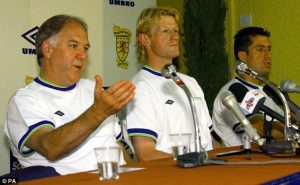 The club are expecting a fantastic night to bring down the curtain on their first season in the Caledonian League and are hoping many family, friends and supporters will attend.

Tickets are priced at £40 and are available from players, committee or management.