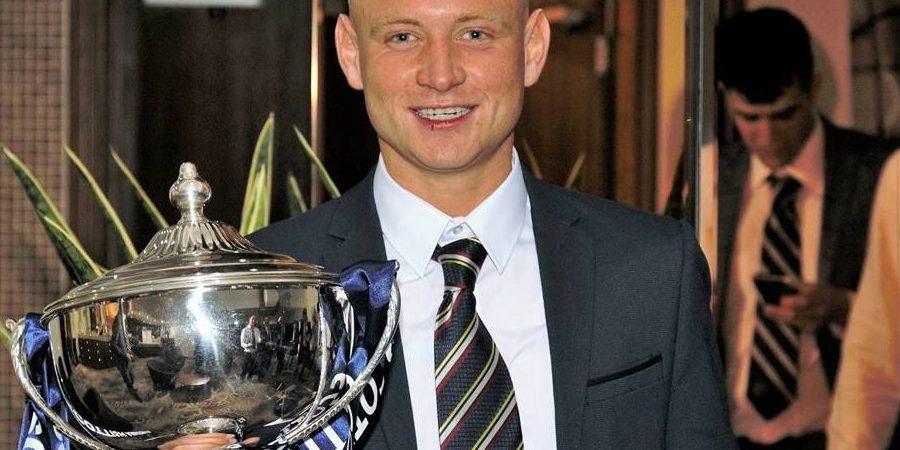 RYAN CRAWFORD became the first ever Thorn Athletic to be capped at international level after helping Scotland to beat Leinster 2-1 at Lesser Hampden.

The club’s skipper came off the bench to make his debut for Bruce McNaught’s men as they lifted the Graham Harkness Memorial Trophy.
Afterwards at the Alona Hotel in Motherwell he was was presented with his official cap marking an amazing spell since he joined the Johnstone club.
Crawford, 25, caught the eye of the Scots boss with his performances at the heart of the Thorn midfield and also as part of the Caledonian League Select.
It culminated in Saturday’s cap call and the club are now hoping he can force his way into the setup on a regular basis.

Thorn boss James Donnelly said: “Ryan has been immense for the team over the past 18 months and he thoroughly deserved to be capped by his country.
“It’s a big honour for him and also for the club in its 20th year to show the progress we have made.”
Meanwhile at Huntershill Sports Hub across the city in Bishopbriggs, Thorn Athletic played out a 1-1 draw with Glasgow Harp.
After falling behind the Caley Premier outfit were forced to rally in order to secure a point.
Returning winger Dean Scott climbed off the bench to net a free-kick marking his second debut for the Johnstone side.
Gaffer Donnelly said: “It was a below par performance and gives us a mountain to climb in the league.”
Category: Latest NewsBy Mark McGeeApril 11, 2018