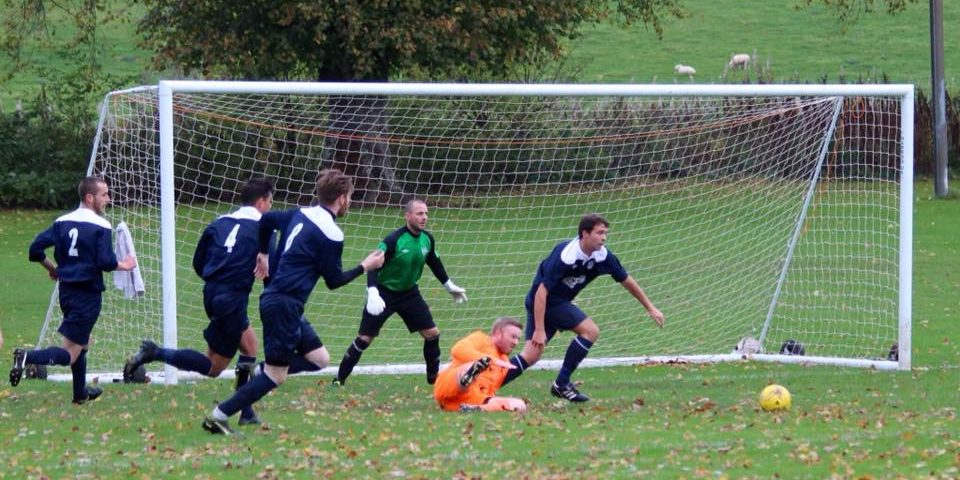 THORN ATHLETIC moved into second spot in the Caledonian Premier League after returning from Stirlingshire with a vital three points.

The Johnstone side made the 90-mile round trip to Doune Castle – their furthest away league opponents – and ground out what could prove to be a crucial victory.
Thorn have now won four out of four in the top flight with a visit of Strathclyde University looming this week where a victory would see them go top.
Long-serving talisman Paul Young nodded home the back-post winner after his header proved too hot to handle for the home keeper.
That came after Craig McMahon had pulled the Thorn level with a smashing pull down and finish.
It was a nightmare start for the visitors who fell behind with some sloppy defending after just three minutes leaving themselves with an uphill struggle. Thorn replied as Ross Horne had a shot blocked on the line.
Doune went close on a number of other occasions and only a combination of poor finishing and last-gasp defending prevented them from going further ahead.
However, when the Thorn finally got a foothold in the game they took it to their rivals and could have won more convincingly.
Goalscorer McMahon limped off midway through the first half with a stomach injury after unleashing a powerful shot that the keeper did well to deal with.
He also cracked the bar in the first half but could not continue and was replaced by Young around the half hour mark. Moments later Young’s pinpoint header had the keeper rooted to  the spot but it cracked the front of the crossbar and went to safety.

Into the second half and it was one way traffic with solid displays from man of the match Ross Perrie and Jamie White. But in truth the whole team were playing well.
Joe Rae, Bud McCann, Horne and David McKay were dealing well with the threat of notorious Doune No10 Alan Inglis who has proved a handful in the past.
In central midfield skipper Ryan Crawford and Jack Doak were getting a foothold in the game with Connor McGowan getting plenty of the ball.
A number of chances came and went for the Thorn and it looked like it would be one of those days.
With no natural strikers left on the park or available it was down to manager James Donnelly to go on for the last 15 minutes to try and push the team forward.
A procession of corners saw a number of half chances fall to Thorn before the winner eventually arrived.

A lofted ball to the back saw Young direct a powerful header goalwards to the keeper’s front post. It looked like he would gather it cleanly but instead it slipped through his grasp and into the net.
Boss Donnelly was delighted to see his threadbare squad get another win under their belts.
He said: “We are literally down to the bare bones and at the moment we have no fit strikers so credit must go to the boys for getting the win.
“Doune is a difficult away test and it would have been easy to drop points here. In the past fortnight we have had two very different performances.
“One was a clinical passing display and the other was a battling performance so it shows we are capable. We will still look to strengthen the squad in the coming weeks as we cannot continue with so many missing.”
ENDS
Category: Latest NewsBy Mark McGeeOctober 17, 2017