JORDAN DEVINE bagged a double to take his tally to ten goals in six games as Thorn Athletic booked their place in the Scottish Cup third round.
The Johnstone side comfortably disposed of Caledonian League rivals Cambria with a dominant display rounded off by a goal from Stuart Robertson to add to striker Devine’s brace.
The team now go into the hat for today’s (Wednesday, October 7) third round draw.
It was a strong-looking Thorn side that travelled to the immaculate Stepps Playing fields in Glasgow for the second time in three weeks.
The previous clash between the side’s had ended in Thorn coming from 3-1 behind to secure a 4-3 victory to keep them top of the table.
But there was to be no repeat of that scare as the visitors took a stranglehold on the game early on with some great football.
Some great build up play saw Dean Scott set up Devine to fire a right-foot shot across the keeper to settle any nerves. 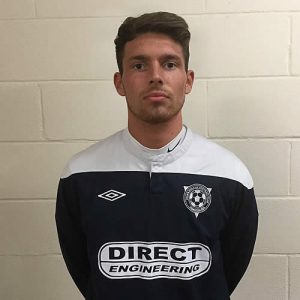 Chances were coming thick and it was no surprise when Devine completely bamboozled the keeper with another low finish which sent him the wrong way.
Paul Young was next to have a go as he robbed the defender in the last third but with only the keeper to beat his finish was high and wide.
Devine had the ball in the net another couple of times only to be denied by the offside rule as Thorn searched for the crucial  third goal.
As half-time approached Cambria finally tested the keeper Liam McWilliams with an angled shot which he blocked to safety.
That was a warning to Thorn that one goal would let their rivals right back into the tie.
The second half started in much the same way and a number of Thorn chances came and went without any joy.
Devine had numerous attempts and substitute Criag McGlone had a great opportunity to seal it with the goalkeeper caught outside the box.
But his finish was straight at the only defender who was blocking the path to goal.
Things were getting a bit nervy as the failure to finish the tie went on and on.
Cambria tested McWilliams again and a couple of cheap free-kicks around the box allowed them to put some pressure on.
Finally the crucial goal came after 75 minutes when strong hold-up play from McGlone at the front post of the Cambria goal saw him lay a ball back for sub Stuart Robertson to thunder home the third.
It was game over at that point as the visitors saw the game out comfortably without really threatening to add to their tally.
This week Thorn are back to league business when they welcome Balmore to the McMaster Sports Centre in Johnstone with a 2pm kick-off.
TEAM: L McWilliams; McCann, McKinnon, Morrison, Horne, Scott, Hay, Young (Robertson), Kennedy (McGlone), Smith (Allen), Devine.