THORN ATHLETIC reached the West of Scotland Cup third round despite a lacklustre display in Glasgow.
The Johnstone outfit needed a second-half strike from Jordan Devine – his 12th goal in eight games – to book their place in the draw.
It was a stuffy affair that promised so much after a promising start.
Thorn cracked the bar inside two minutes when a pinpoint cross from Ally Brown saw Liam Allen’s diving header strike the underside of the bar and come back out.
It would have been a dream start for the visitors but instead it proved to be a let off for the home side.
The game descended into a sluggish affair with neither side playing much football.
Matters were not helped by some poor refereeing which didn’t help the flow of the game.
Red Star showed glimpses that they could cause Thorn problems with some long balls forward. 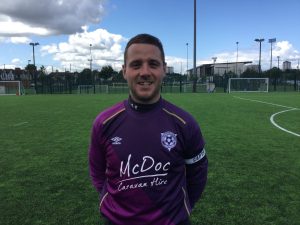 The deadlock could not be broken before the interval and it wasn’t a surprise given the poor fare on show.
After the break there was slightly more urgency about Thorn with the threat of changes from the management ringing their ears.
And thankfully the second 45 produced more action for the spectators.
Donald Morrison looked to have opened the scoring with a powerful show into the roof of the net which hit the back of the net and came back out.
Despite Red Star players admitting the ball had crossed the line the hapless referee ruled it out much to everyone’s amusement.
Thankfully the Thorn didn’t have long to wait before the opener came.
And it was no surprise when Devine popped up with the decisive strike.
John Hay floated a ball to the back post and Niall Kennedy volleyed it back across goal for the striker to apply the sliding finish.
Moments later the game should have been over when Thorn were awarded a penalty.
Winger Dean Scott was flattened inside the box as Red Star’s discipline began to go amid a flurry of bookings.
But the normally clinical Devine was denied from the spot when the keeper got down well to his right to parry.
Further chances came Thorn’s way when sub Paul Young robbed the last defender but couldn’t provide the finish.
Ross Horne also had a pop at goal which finished wide and Tom Smith threatened on a couple of occasions to no avail.
Team: L McWilliams, McCann, McKinnon, Morrison, Brown, Scott (Horne), Hay, McEwan (Young), Allen, Kennedy (Smith), Devine. Subs: Callaghan, Cunningham.