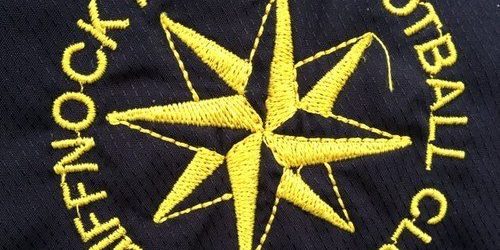 TEN-MAN Thorn Athletic secured a heroic away point against much-fancied Giffnock as they took a step closer to League Cup progress.

The Glasgow giants knew a draw wasn’t enough against the Johnstone side with goal difference going to be crucial in the fight for top spot in the section.
And James Donnelly’s team now go into Saturday’s home clash with Weir Recreation knowing that a reasonable win would see them reach the quarter finals.
Red-hot striker Craig McMahon made a lightening start and could have opened the scoring early on but eventually dragged his shot wide.
But he was not put off and soon broke through again after a pass from Tony Galbraith and this time made no mistake with his shot across the keeper and into the net.
Giffnock started slowly but going behind soon saw them step up a gear and control proceedings.
Thorn remained dangerous with Tom Smith and McMahon causing problems for an experienced home defence that included Scotland’s amateur No1 Craig Marshall.
Some strange refereeing decisions from the match official left players on both sides scratching their heads.
Donny Morrison saw his name in the book for dissent and not long after tempers on the touchline boiled over as back-up keeper and coach Tony McWilliams kicked out only to see a yellow card flashed back.
Both teams had a few half chances and Giffnock were finally rewarded with an equaliser when a poor clearance came back into the box and home skipper Mark Shanta was played on side as he directed a backwards header past Liam McWilliams.
With the teams level at the break Thorn really had to produce more in the second half to trouble their rivals.
And with half an hour to go that was made to look like an impossible task when Morrison appeared to head the ball onto his hand on the edge of the area.
The inexperienced whistler blew and reached for a second yellow card followed swiftly by a red and sent Morrison off.
The resultant free-kick was a poor effort and Thorn knew they had to regroup fast.
Giffnock sensed blood and began to throw bodies forward and balls into the box. As the game wore on Thorn’s forays up the park were restricted to only the odd breakaway.
Giffnock penalty claims were waved away with 20 minutes to go with howls of derision and figures on the home touchline becoming increasingly exasperated.
However, Thorn were defending well and dealing with most of what the home side threw at them.
Tired legs crept in and that was probably the biggest danger to Donnelly’s team as they edged closer and closer to a crucial away point.
It looked like disaster had struck in the closing moments when the ball ended up in the Thorn net but play was hauled back by the official to the relief of the away touchline.
And in the dying moments a few welcome fouls from the home side allowed Thorn to see it out and head home the happier of the two sides.