FIVE alive Thorn Athletic spooked Stirlingshire cracks Fallin AFC with a four-goal second half blitz on Halloween.
And they ensured a sloppy first 45 didn’t come back to haunt them with some improved finishing.
With top scorer Jordan Devine rested to shake off an ankle injury there was just one change from the side that defeated Larkhall the week before with Smith restored to the line-up.
New signing Gary Wilson made his home debut at the McMaster Centre in Johnstone after the park had passed an early morning inspection.
And it didn’t take long for Thorn open the scoring when full-back McCann took advantage of a slack clearance to fire his shot through a pile of bodies into an empty net.
However, any thoughts that the visitors would collapse quickly disappeared as they managed a few decent attempts on the home goal.
Keeper Liam McWilliams produced a fine save moments before the break after a spell the visitors had the upper hand in.
After the break there was a more offensive look about Thorn and as a result they were rarely troubled at the back.
Both Smith and Michael McKinnon saw shots blocked from close range before the killer second goal finally arrived. 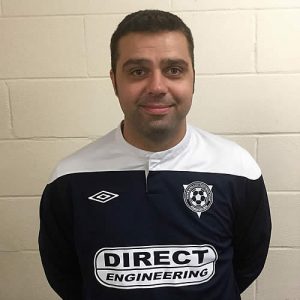 Smith took possession on the left and charged into the box before neatly chipping the keeper who had gone to ground.
The introduction of McGlone for injury-hit Johnny McEwan saw a quick-fire double of well-taken goals.
McKinnon found himself heading to the bye line after a progressive move down the left and his cutback saw McGlone unmarked to score.
With the introduction of Paul Young, Niall Kennedy and Horne came fresh impetus that saw Fallin stretched and running out of energy.
Soon after their arrivals McGlone was on target again after a threaded pass from Young allowed him to apply a cool finish.
The visitors were pretty deflated as Thorn kept kept possession for long periods as they probed for more goals.
And the scoring was wrapped up when Horne battled bravely in the box and saw a powerful deflected shot nestle in the net off the underside of the crossbar.
A few more half chances followed before the referee blew prematurely to bring proceedings to a close.
Manager Donnelly said: “First and foremost it was about getting into the next round against a team that were a bit of an unknown quantity for us.
“We never quite got going in the first half after an early goal so it was good to get a more convincing second-half performance from the boys.
“Everyone played their part and a third consecutive clean sheet was also welcome.
“We got all five substitutes on and there is real healthy competition in the squad – and they will all be needed over a long season.”
Next week Thorn return to league business when they host Cambria in the Caledonian League First Division at Johnstone Hub with a 3pm kick-off.
And they will find out their Scottish Cup fourth round opponents when the draw takes place at Hampden Park on Friday at 11am.
Team: L McWilliams, McCann (Callaghan), Wilson, Morrison (Young), Brown, Scott, McKinnon, Hay (Horne), Allen (Kennedy), Smith, McEwan (McGlone).