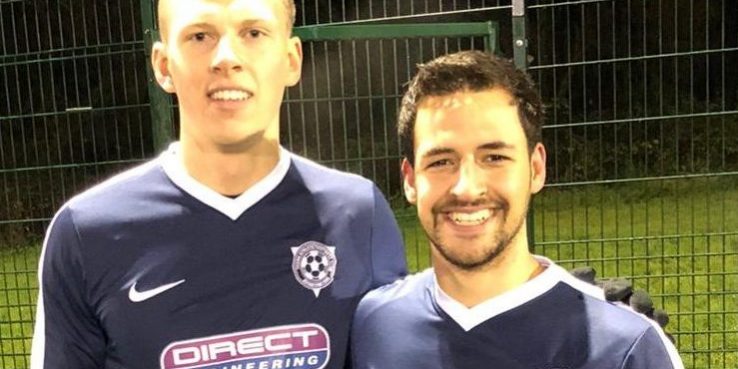 THORN ATHLETIC have hailed their own ‘foreign legion’ after having a Spaniard and a Swede training with them for the past four months.

The Johnstone club were contacted by Albert Rull Sans and Adam Malm who have been studying at The University of the West of Scotland since the summer.

Catalan Albert and Adam, from Norrkoping, are part of the Erasmus scheme which is run by the European Union to provide opportunities to students who want to study or gain work experience abroad.

And the duo, both 22, have been training with the Thorn on Monday and Wednesday evenings alongside their involvement with the UWS team.

Members of the Thorn Athletic squad have enjoyed having them around and they both recently made debuts for the club in a friendly match against Dalry Juniors.

Club officials presented them with replica Nike Thorn jerseys as momentos before the match and they were guests at the club’s next home match where they enjoyed hospitality during the game.

Adam has now returned home but the club has received international clearance from the Royal Spanish Football Federation to sign Albert until the end of the season.

Thorn Athletic manager Johnny McEwan said: “It’s been a breath of fresh air having the boys around and they are both smashing lads and very able players.

“We’d like to have given them more opportunities but our schedule has been busy. However, it’s possible that Albert could play a part for us once he returns after Christmas.

“Hopefully they’ve enjoyed their time in the area and we wish them all the very best with their studies and their football.”