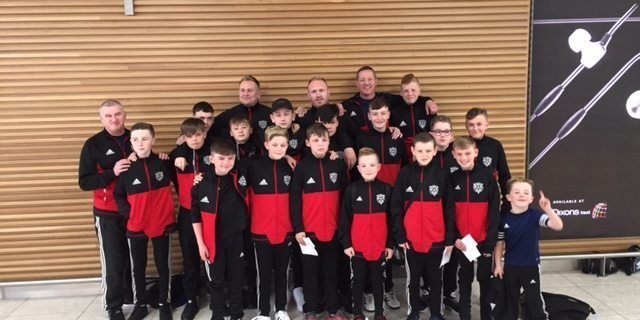 THORN ATHLETIC youths have taken to the skies and the roads to clock up the miles over the past few weeks.

The club’s 2004 side flew to Europe to participate in the Holland Cup staged in Almere just on the outskirts of Amsterdam.
Meanwhile, the 2007 side travelled south to the coastal resort of Blackpool to take part in the Blackpool Football Festival.
Both side’s mixed with teams from across Europe and the United Kingdom as they tested themselves outside of their normal comfort zone with the 2007’s winning their first ever trophy.
The 2004’s became the first ever team from the Johnstone club to participate in an international tournament and a fantastic and unforgettable time was had by all in the contingent.
On the opening day they drew with host side FC Almere then recorded victories against St Paul’s from England and Torsted from Denmark ensuring they won their group section and entered the final stages on the Sunday.
The second day saw them lose narrowly to Magherafelt Blues of Northern Ireland then beat Irene of Belgium before eventually losing in the final game to rival Scottish-based side Cumbernauld Colts.
Meanwhile more than 50 Thorn Athletic players, coaches and family enjoyed a couple of great days in the seaside festival at Blackpool.
They competed well against Accrington Stanley, East Fife and Caledonian AFC from Ayr to name but a few of the sides and triumphed to secure the Blackpool Cup Plate.
Both teams done superbly well fundraising to cover the costs of their respective trips and reduce the burden on the children and families participating.
The club appreciate greatly the work of everyone who supported any of those fundraising efforts in the weeks and months building up to these trips.
Category: Latest NewsBy Mark McGeeMay 4, 2017