NOT long now until the big kick-off this weekend in the Caledonian League.

During the course of an extended pre-season the Thorn Athletic camp have been busy preparing themselves for the campaign ahead.

That saw an interesting schedule of matches begin on June 29 and finally end at the weekend ahead of Saturday’s League Cup section opener against Gartcosh United. 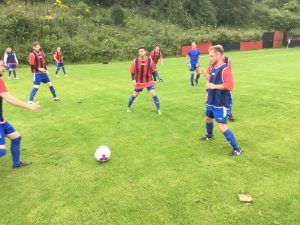 With just a few sessions under their belts the team welcomed brand new team BSC Glasgow Amateurs to Johnstone Hub for a midweek opener.
It was a step into the unknown against a team in their early stages of development but the Thorn ran out 4-3 winners courtesy of a double from Jordan Devine and goals from defender Donny Morrison and midfielder John Hay.
The main reason an early match was arranged was to get some game time ahead of what has now become an annual trip to the Borders to face Lowland League side Sellkirk, managed by Garry O’Connor.
And it was a sparce looking team coach minus a few familiar faces that departed Johnstone for the two-hour trip to Yarrow Park. That didn’t seem to dampen spirits on the way back – but we’ll come to that!
Despite falling behind to a sloppy goal – aren’t they all – the Thorn looked good for the most part and matched their hosts almost all of the way.
An equaliser duly arrived through Craig McMahon and the visitors looked deflated to be undone by a goal with almost the last kick of the ball. That was a measure of how much the players had put into the 90-odd minutes.
But there was no signs of any deflation after receiving the hospitality of the very generous Selkirk committee and a stop at Asda for the obligatory bus ‘kerry oot’.
It was an initiation of sorts for new boys like Darren Lamont, Jack Doak and Connor McGowan – making his first appearance for the club.
The tough games just kept coming for the team and a hard-fought 3-3 draw with Greenock Juniors at Johnstone Hub was next up. The goals were supplied by McMahon, Dean Scott and McGowan. It was a stern test – and one the boys passed. 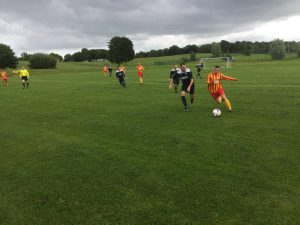 The team had plenty match practice under their belts as they headed to ‘The Hibbee’ in Duntocher to face a Drumchapel Colts side who had swept away all before them in the SAFL the previous season.
Again, with several players missing, what followed was a display of free-flowing football and clinical finishing. McMahon bagged a double, Devine was on target and Tony Galbraith, Liam Allen, John Hay and Donnny Morrison also registered on the scoresheet. Things were looking good.
An unscheduled friendly against recent West of Scotland Cup winners Greenock HSFP was squeezed into the diary and off we went to Inverclyde Academy on a Tuesday night.
Another positive result was earned and a scoreline that will have raised more than a few eyebrows among those who were not present.
A comprehensive 5-1 win courtesy of a Devine double (see what I did there) and goals from Morrison, Hay and McGowan was very welcome against a team who were no strangers to dishing that kind of reverse out to their visitors.
It’s always nice to welcome opponents from a different association and Stewarton United seemed well up for their trip to the McMaster Sports Centre to represent the Ayrshire AFA.
With  a bus almost filled they were in good spirits and not even the 7-2 defeat could dampen that in the Thorn Inn afterwards, where they were very welcome guests. 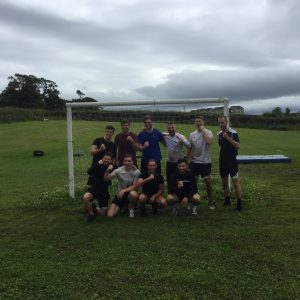 Two hat-tricks – from McMahon and Devine – were chalked up. But in truth it could have been more but for some fine goalkeeping on the day from a gentleman who had clearly matured like a fine wine.
Another hastily – and probably ill-advised – match was shoe-horned in against Glasgow Junior cracks Vale of Clyde. With a threadbare 11 players available it was always going to be a testing night. And so it proved.
Despite not being outclassed, the Thorn were certainly stretched and succumbed to a 3-1 defeat with Liam Allen countering for the visitors at Glasgow Green.
And so came the final curtain in terms of pre-season with a clash against current Scottish Cup U21 holders Johnstone Burgh in what was loosely a local derby.
Again a stretched squad that had worked immensely hard for the previous six weeks found this was a game too far and turned in probably the poorest display of the eight warm-ups.
But both side’s knocked the ball about well with the Burgh winning 2-1 and McGowan getting in the scoresheet again to take his pre-season tally to three.
But it wasn’t all about the games for Thorn as a visit to Ayrshire Warriors was another highlight for the lads as they enjoyed some fun in the mud down in Kilmarnock.
The usual holidays and suspensions will come into play when the season kick-off but the squad are in decent shape for the campaign ahead and a return to the Premier League.
LAST MATCH
NEXT MATCH
LAST MATCH