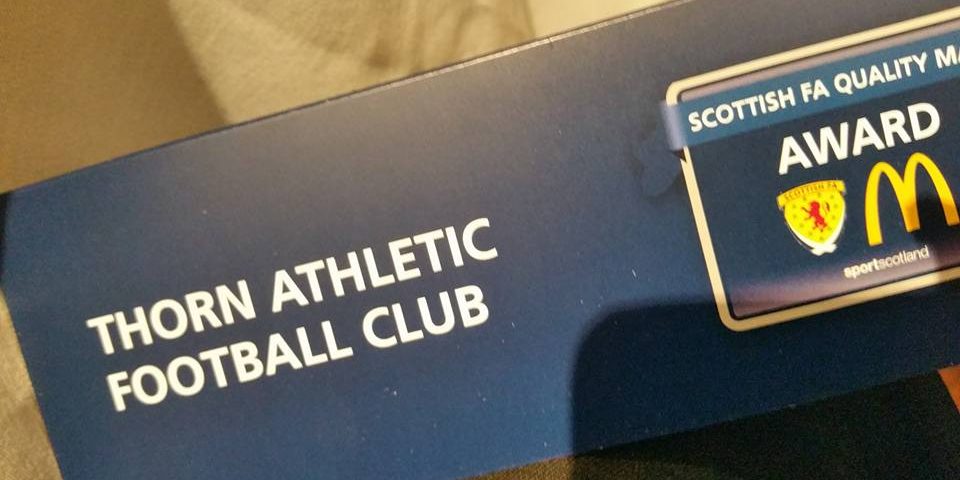 IT was Firhill for thrills this week as Thorn Athletic attended the Scottish Football Association West Region’s Quality Mark event at Partick Thistle.

The club’s head of youth development Derrick McMillan was accompanied by club secretary Mark McGee and 2007 coach Iain McMillan to collect the Quality Mark Standard Award on behalf of ‘The Thorn’.
Representatives from around 20 grassroots clubs were present to receive hospitality, listen to the journeys of their fellow clubs and take in the SPFL clash between the Jags and St Johnstone, which the home side won 2-0.
Despite being formed in 1998 the club has only been working towards the Quality Mark Award for the past few years after Derrick agreed to lead the project.
It was a proud night for the club which now has teams at 2004/6/7/8/9/10 alongside the adult side who compete in the Caledonian League.
Our rapid progression in such a short time means we now have more than 80 children, 20 adults and 25 coaches and officials involved in the set-up.
The club will now attempt to move onto the next level which would see them attain the Development award.
Youth chief Derrick McMillan said: “It was a great achievement for us so early after our introduction of youth teams to the fold.
“Our first youth team at 2006 only started around four years ago and since then we have seen a rapid growth in teams and quality coaching.”
Club secretary Mark McGee said: “When the club started 18 years ago I never thought that one day we would have more than 100 people involved.
“But it’s great for the club and all the teams are doing well. Hopefully we can go from strength to strength in the coming years.”
Category: Latest NewsBy Mark McGeeFebruary 24, 2016