THORN ATHLETIC manager Johnny McEwan hailed his side after they brought the Caledonian League’s William Turner Challenge Cup back to Renfrewshire for the first time in 20 years.

The Johnstone club were celebrating after Tom Smith’s second half strike saw off the challenge of the Lanarkshire side at Broadwood Stadium on Friday night.

Viewfield Rovers were the last side from the area to bring the cup home and McEwan was delighted to finally land his first silverware.

He said: “It was a hard fought encounter but we created the better chances and ultimately deserved the win. Our keeper didn’t have a save to make although we soaked up some pressure in the latter
stages.

“For many of the younger players in our squad this was their first time getting over that winning line in a competition and hopefully they will want more now.

“We had a fantastic support there including fifty or sixty kids from our youth academy so it was a great experience for them and shows what the club is all about.

“It’s good for everyone associated with the club, sponsors, supporters and it keeps everyone motivated.” 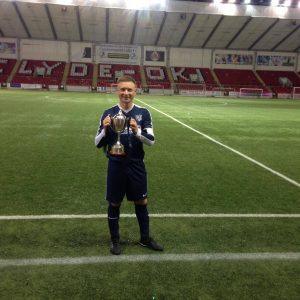 Thorn were without the injured Connar McGregor and suspended Ross Horne which saw an opportunity for Bud McCann to come into the side on the right flank.

There were some early nerves as the league leaders took time to settle with Dalziel knocking the ball about and making Thorn work hard for possession.

Eventually a few decent half chances fell the Thorn’s way with Smith warming the keeper’s hands with some powerful efforts.

It was a case of creating a few more gilt edged opportunities after the break and the goal arrived just short of the hour mark when Smith made himself the hero with a low shot from inside the box.

Thorn could have doubled their lead soon after and again it was Smith who threatened but his shot was cleared off the line.

Some nerves kicked in as the game got tighter in the later stages with Dalziel given the opportunity to launch some high balls into the box. However the defence stood firm and the final whistle was greeted by jubilant cheers from the large travelling support.

Skipper Ryan Crawford was presented with the cup by the Caledonian League President Graeme Robertson while defender Ian Paterson received the man of the match award.